For a personal AI project I'm working on, I needed to know how well people can distinguish between sunsets and sunrises. I always found pictures of the sky during sunsets and sunrises hard to distinguish, but I wasn't sure if that was true for everyone. I needed numbers, so I decided to conduct a survey. I originally only wanted to survey some of my friends and family members, but the survey results weren't really conclusive, I needed more data. After some research, I found r/SampleSize and r/takemysurvey. Know that I found a way to survey a large quantity of people, I set about making my new survey. The following are the results of the survey.

Before I start going into details about the demographics of this survey, I want to thank everyone who participated in the survey. I found all respondents for my survey on reddit by posting in r/SampleSize and r/takemysurvey, which I highly recommend to anyone looking for participants for their surveys.

My survey received 95 responses from people out of at least 19 different countries. 22 respondents didn't specify their location. England and Scotland are combined into UK as part of the data normalisation and the Virgin Islands are included in the count for the US due to limitations of the plotly map. Here is an overview: 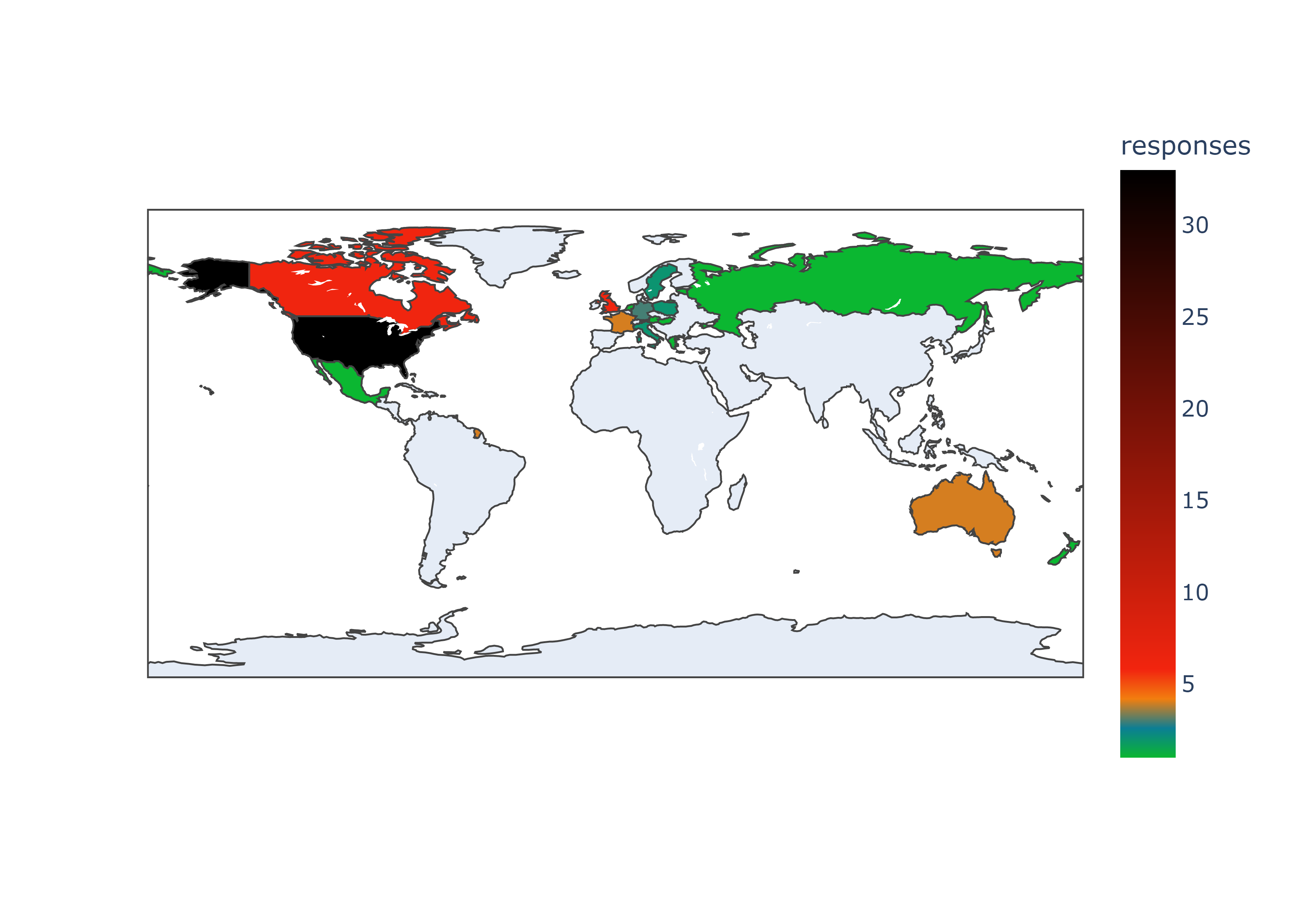 Most of the respondents where in the age groups of 18-24 and 25-34, which somewhat aligns with the overall age distribution of reddit users (Statista). 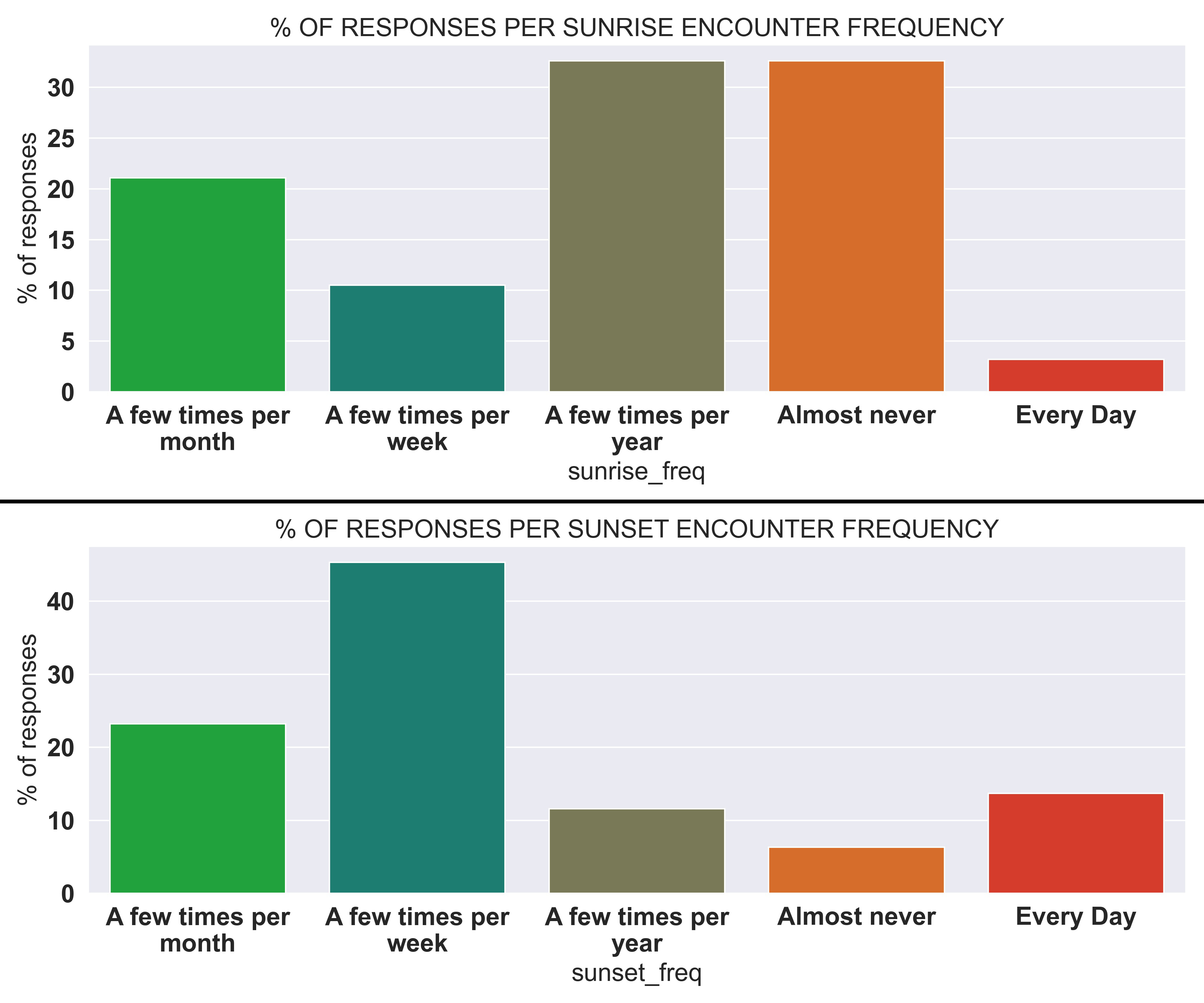 People aged 25-34 are slightly more likely to frequently see the sunrise than people 18-24. I assume that this is caused by reportedly shorter sleep durations with increasing age (U.S. Bureau of Labor Statistics), (Withings). I don't have enough data to interpret for other age groups.

How often people witness the sunrise grouped by age

The statistics on how often people witness sunsets doesn't seem to have an age dependent trend.

How often people witness the sunset grouped by age

Where this survey is applicable

The results of this survey only apply to pictures of the sky during sunrises and sunsets without any context. I assume that additional context in the picture would drastically increase the rate at which pictures are identified correctly as it would provide additional clues like human activity and location.

The survey included 2 types of questions: 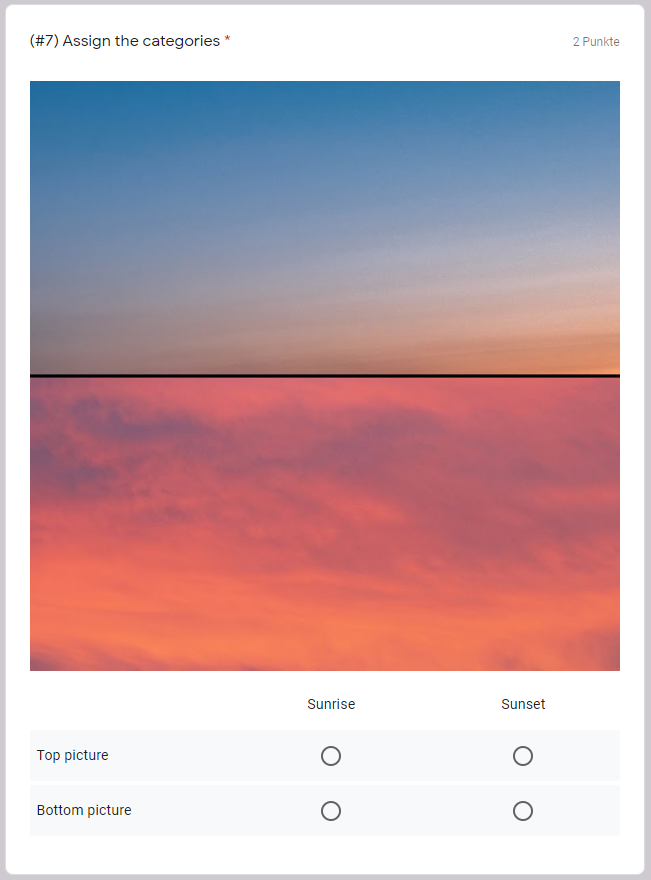 The purpose of the second type of questions was to find out, if the limitation that two pictures could only contain one image of each type would increase the recognition rate, which it didn't.

The distribution of the average percentage of correct guesses per respondent.

The rate at which people answered each question correctly was consistently below 50%, with only one question that reached 61.05% of correct answers. An accuracy of at least 60% would have been required to be able to say that having people decide categories would lead to more reliable results than a random decision.

Percentage of correct answers per question

Taking a look at detailed statistics

The thing I was most interested in when looking at the survey results, apart from the overall result, was seeing if there would be qualities that would make certain respondents more likely to give correct answers. Unfortunately there weren't any correlations between the frequency at which people witness sunrises or sunsets and their likelyhood to give correct answers. The group of people who witnesses sunrises a few times per week even has the highest deviation in their answers.

The group of people who witness sunrises everyday was slightly more likely to make the right choice, but I would say that the difference in results is insignificant, especially considering the sample size of 3. The same also applies in regards to the respondents frequency of sunset observations:

The same is also true for age, so I'm not going to include detailed statistics about that here. Lets take a look at the most interesting question instead.

The bottom half of this questions image isn't really all that interesting, but the top part is, because it's the only question that was more likely to be answered right than wrong. Lets take a look at the image I used for that question, before we discuss it's results. 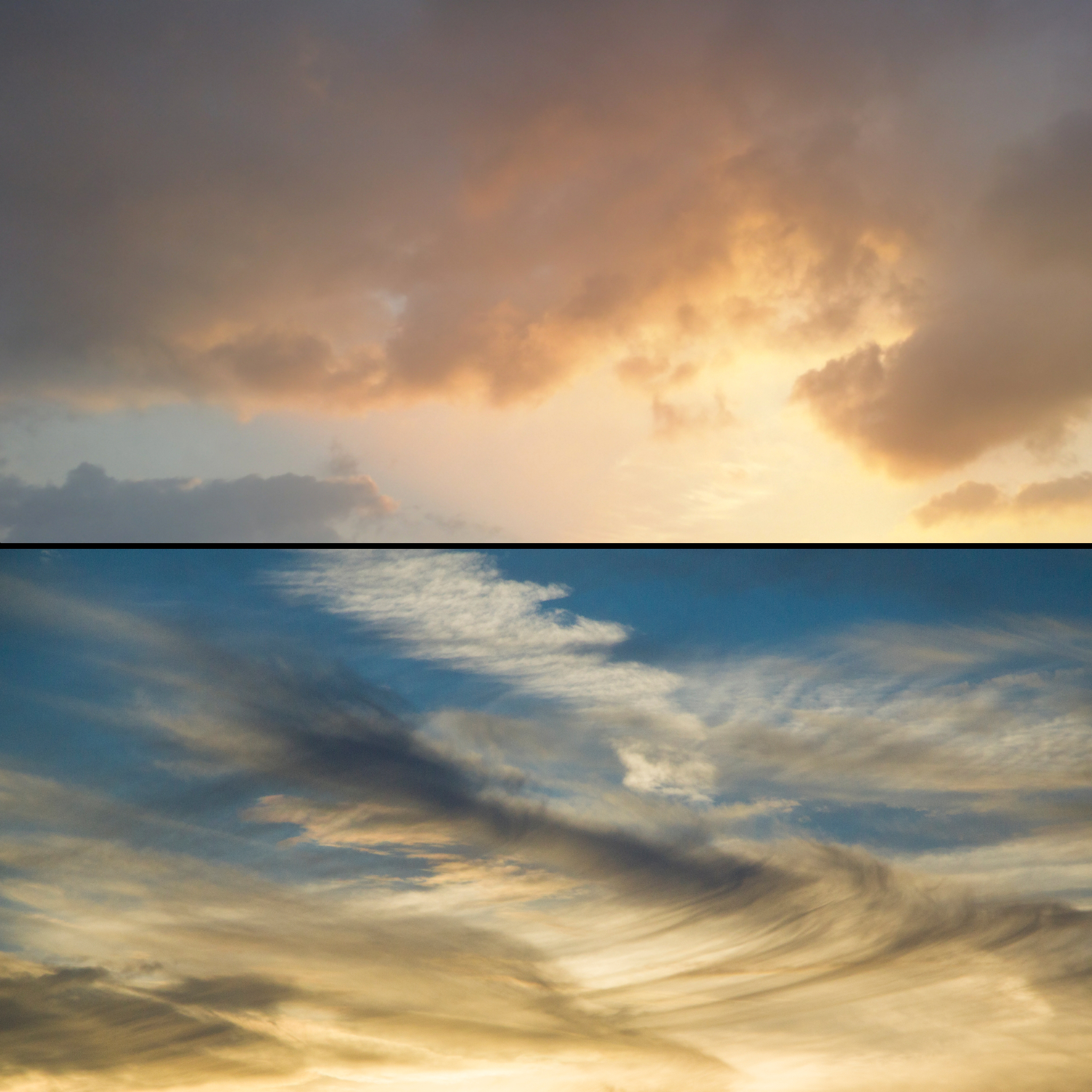 Question 5 (sunrise at the top, sunset at the bottom). Attribution: Credits 3), 4)

I personally would have had a really hard time deciding which of those two pictures is the sunrise. I assume people correctly picked the first picture because it looked slightly colder and darker, but that's just my personal opinion. Let's take a look at the data for the top half of this image.

What's interesting about this question is, that people respondents who witness sunrises more often where more likely to answer it correctly. Which might explain why I found it hard to classify, since I am in the category of "a few times per year". The results for this question grouped by sunset encounter frequency look similar, so I won't show them here.

A short comparison with my control group survey

Before I ran this survey, I ran a very similar control survey with my friends and family members. It had fewer and slightly different questions, some questions were used in both surveys. 8 of the 10 respondents are in the 25-34 age group and 7 of the respondents have an education in STEAM fields (Science, Technology, Engineering, Arts and Math). The respondents of that survey were on average able to give correct answers in 58.89% of cases. Let's take a look at the results for the questions that both surveys shared.

A comparison between this survey and my control survey

A zip-file with more statistics can be downloaded here.

Possible explanations of the results

Since there weren't any clear connections between different demographics and result quality, I can only attempt to explain the results. I assume that the lack of context in the pictures made it harder to give a correct answer, because it removed the important context of location. Different locations can influence the appearance of sunsets and sunrises due to different climates and different amounts of particles in the air. A higher particle count will lead to a more red appearance, since blue light is dispersed easier than red light and will therefore be perceived less intense in regions with higher counts of particles in the air.
The lack of context also removes the ability to make a guess of the current time of day on the basis of the amount of human activity. A qualitative comparison of a survey with pictures with context would be needed to confirm this theory.
Aligning with the science, people were more likely to classify pictures with a higher presence of reds and deep oranges as sunsets.

Humans aren't able to reliably distinguish between sunrises and sunsets from pictures of the sky without any additional context. The average rate of correct decisions of 35.35% means that random decisions would achieve similar or very likely better results. When a picture with a red sunrise is put next to a picture with a not very red sunset, people will select the wrong class for the pictures, which aligns with the science behind the color of sunsets and sunrises.

What the results mean for my AI project